Please join us each Friday at 11:00 am for our webinar series streaming on our YouTube channel and Facebook page.  We are also live streaming to Periscope. All webinars are recorded and available in our Archive below. Activity Handout

We will be discussion why these women made their college decisions, what film and art school is really like and their plan to break into the industry. 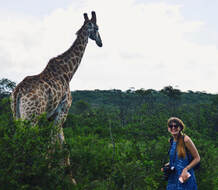 ​In the production world, who you know is everything. Baylee will walk you through how she got involved the film industry, make connections, developed a community and how that leads to opportunities. She will go over different resources to check out and groups to join, as well as networking and relationship building tactics that can lead to work.  https://youtu.be/OW1mgkn6Ey

Baylee Sinner has been working professionally in the film industry for over 10 years. She started as a production assistant and worked several internships with different agencies before graduating from Washington State University. Since graduating, Baylee written, produced, and directed for clients like the Seattle Seahawks, T-Mobile, Amazon, and more as well as made her own short films, documentaries, and music videos. Some of her work can be seen on her website: https://bayleesinner.com

Katie loves to talk with up and coming film and acting students about content creation and forging your own path.  She emphasizes having confidence in your own creativity, and how to stay true to your voice in the industry. https://youtu.be/0Rhu-kJj8xo

Katie Northlich is an actor, writer, solo performer, improviser, and performing arts coach.  She is a Four Time National Monologue Champion, having written, performed and produced original work since 2001. Her solo shows have played to critical acclaim and sold out Off-Broadway houses in New York City, including the Cherry Lane Theatre.  Katie's play "Two Of Them, Looking," was produced in New York in 2015, and Katie is in the middle of writing her first novel.
In 2019, Katie booked nine television commercials as an actor in Los Angeles.  Working in the commercial industry, Katie applies her sketch and improvisational training to the booking process, having been hired for her own pitches and playfulness in the creative process.  She utilizes this approach as a performing arts coach, having taught upward of 1200 students over 9 nine years in both NYC and LA, including international TV stars as well as NBA and NFL players.  Currently she works in Development, Marketing and is on the Acting Faculty at the Studio School in Los Angeles, CA.  Katie just signed on to direct her first film in Spring, 2020.

How can filmmaking/storytelling be used for social change, moving us closer to a world of freedom, dignity and equality for everyone?
YouTube: https://youtu.be/yUZEAcrxcUg

The Hero's Journey has become integral to Hollywood and the narrative industries -- from 2001 & Star Wars to The Avengers & Finding Dory. Around the world and across the fields of myth and storytelling, women, men,  scholars and storytellers are exploring what distinguishes the Heroine's journey from the Hero's. To what extent are they the same? What about them is different? What do Inanna, Isis, Artemis and Persephone have in common with Katniss, Wonder Woman, Rey and Furiosa? Drawing from popular stories alongside the work of great mythologists and story scholars, this is what we're going to explore. ​ https://youtu.be/Ogu0LdUj1UQ

We write, direct, produce, illustrate, animate, sound design and score our own short films.  We use a combination of Maya, and Source Film Maker to bring our games to life and inject narrative into the worlds our communities immerse themselves in.   Game mechanics bring players in, narrative and emotional connection keeps them coming back.   ​​ youtu.be/P0s0CUDTpf4

City of Mukilteo City Council Vice President Kneller was elected to council in 2017.  Ms. Kneller graduated from Washington State University with a degree in Broadcasting and Production Management and currently works at Valve Corporation as an Executive Producer and co-owns a production company managing live broadcast needs for professional sports broadcasts around the country. ​

Once Upon A Time: Learn to tell the origin story that makes you uniquely you
The moments and lived experiences that have shaped and influenced who you are today are the very foundation of your personal brand story and what makes it unique. In this insightful and lighthearted session, Miri will share personal examples and key strategies for building and leveraging your origin story to effectively brand yourself for success.
Key takeaways:

We will be discussing the role social media plays in the media industry and specific techniques for developing a professional social media presence with our All Girls Film social media manager Hannah.

Clara is the Global Education Community Lead at Adobe Education. Prior to Adobe, she started out her career as a middle school educator, and has since worked in EdTech for the past seven years for companies including Amazon (Kindle Education), Remind.com, and Edutopia, The George Lucas Educational Foundation. edex.adobe.com
​​

Tanya Avrith M.A. EdTech is a passionate educator and author of “The Google Infused Classroom”; from Montreal Canada, now living in South Florida. She is a Google Certified Innovator and Apple Distinguished Educator. With deep roots as a teacher and pedagogue, Tanya works with schools to help plan and execute large scale deployments and professional development plans for digital citizenship, technology integration initiatives and organizational development in schools. Tanya is currently works at Adobe as the North American Education Evangelist.  http://www.tanyaavrith.com/

Hannah is anything from ordinary. Based in Washington, Hannah has been making movies since she could walk. Focusing her career in Film and Print, she has been able to expand her experience from Modeling and Acting to Directing and Editing. She has been attending the All Girls Film challenge since she was in sixth grade and plans to collaborate with them in the future. Hannah hopes to inspire other women in media to share their stories and to continue creating.

Learn about guiding the vision of creation for projects, managing artists and business/intellectual property development tools to take with you on the job! https://youtu.be/6um5bO_WkdU  - Slideshow (pdf)

Art Director leading and mentoring teams of artists, designers, and developers to create story driven content and deliver creative products which elevate customer experiences in multi-sensory environments and new technologies. Provides synergistic creative direction at the forefront of innovation in the immersive interactive space. Consistently recognized by partners as being a story-builder. https://www.marisaerven.com
Lessons: Networking

This year we wanted to give you a chance to meet the professionals attending our event before you get there so you can be prepared to ask them some fantastic questions. Please check out our new Professionals page.